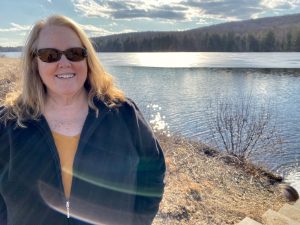 I’m a former intellectual property attorney who has been an indie writer since Independence Day in 2011. I also run a small publishing company, eFitzgerald Publishing, and produce the Beyond the Stars series of space opera anthologies. On the side, I sing—everything from jazz to opera—and I direct plays and musicals.

I’ve just released two new books. One is a collection called “Fitzgerald’s Funny Sci-Fi Shorts” and the other is “Airborne,” a book about a plague on a plane! I have lots of other book projects hovering somewhere between the brilliant idea phase and the nearly-complete stage.

You may know my name from “Karma of the Silo,” my dystopian sci-fi collection set in Hugh Howey’s world of WOOL. Before that, I wrote RUNNING, about two women vying for the presidency of the U.S. When I first got the idea, it seemed impossible. We’ll see! Don’t even get me started on American politics these days…

I’m married to my excellent husband, am mother to four adult children, two by birth and two by marriage, and I live in New England.